Any breed of cattle can survive and produce under ideal conditions. Most cattle breeds can survive and produce under winter conditions, however when the summer heat appears or drought strikes, fertility and growth is negatively influenced. One of the main challenges of livestock production in the Southern two-thirds of the United States is the inability for many British beef breeds, namely the Shorthorn, Hereford and Angus to perform in the warm to hot conditions of these ranching areas. Livestock breeds which show the least climatic stress, produce the most profit. Thus, many ranchers turn to a Bos Indicus animal, often sacrificing meat quality and temperament, among other things to obtain heat tolerance for their herd. The Bonsmara was bred to excel even under harsh conditions and rough climates. This breed is the optimal choice when searching for genetics that provide the benefits of a Bos Indicus animal, with the temperament and meat quality of the Bos Taurus breeds. Bonsmara brings the functional efficiency needed for crossbreeding with British breeds that the Bos Indicus breed cannot provide.

One of the biggest issues the American Beef Industry faces today is producing a consistently tender, juicy, yet lean product. Bonsmara beef has been a favorite in South Africa for well over fifty years. However, Bonsmara beef is now available in the U.S. and it is the new beef product American consumers crave. Beef from Bonsmara cattle is lean, without sacrificing tenderness, flavor or consistency. In fact, DNA markers reflect Bonsmara beef is more tender than the beef currently produced by the existing British breeds in the U.S. Results of research from Texas A&M University shows that beef from Bonsmara cattle tested only 1.9% tough. When research was performed on Bonsmara/Angus crossbred steers fed at Cattletown Feedyard, 95% classified as tender. This consistency in tenderness is what consumers desire.

Born to Breed. Born to Lead. 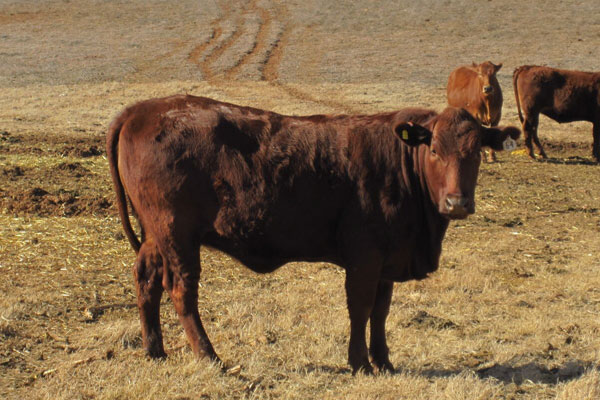 The Bonsmara breed is adapted with the growing ability to manage stressful environments while also reaching a satisfactory slaughter weight. Their ability to adapt to stressful conditions minimizes the need for antibiotics and other medicines. This valuable trait reduces the input costs of production and is highly valuable for producers who aim to earn a natural or organic premium on their beef products.

Already a favorite of global ranchers, many American ranchers can benefit from the genetic advantages of Bonsmara cattle. For more information on how Bonsmara cattle may fit into your breeding program, please contact us. We proudly serve customers throughout the nation. 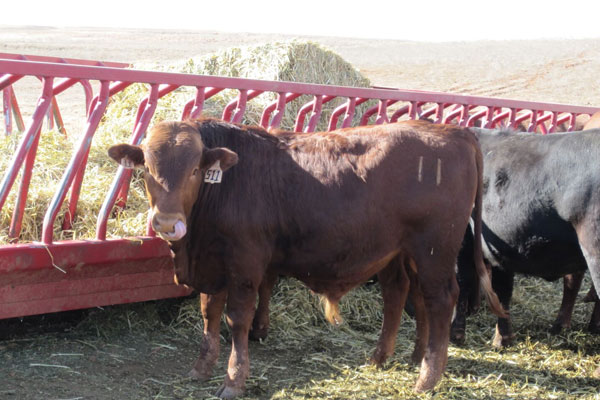 The Bonsmara breed began in 1936 at the Mara Research Station in South Africa. Dr. John Bonsma, one of the foremost animal experts in the world was put in charge of formulating a breed of cattle that would thrive in a subtropical environment. After visiting King Ranch to study the Santa Gertrudis breed, he traveled back to South Africa where he set out to create a Bos Taurus animal that had the heat tolerance of the Bos Indicus. He began with a Sanga Africaner females, a large framed horned Hereford, and added Shorthorn until the new breed was ⅝ Sanga Africaner, 3/16 Hereford and 3/16 Shorthorn. The new breed’s foundation consisted of five different families which Dr. Bonsma presented to the South African government. The breed was named Bonsmara, a mix between Dr. Bonsma’s surname (the animal scientist who created the breed) and the name of the Mara research station. In less than 25 years, Bonsmara became the strongest and most prevalent beef breed in South Africa comprising more than 80% of the total cattle population.

In the early 1990’s, a Texas cattleman began pursuing the idea of importing Bonsmara cattle into the United States. After jumping through several legal loopholes, Bonsmara embryos representing the best of Bonsmara genetics South Africa had to offer were shipped to Canada where some were claved out while others were imported into the U.S. The first Bonsmara was born in the U.S in 1998. For many years the original herd was operated as a “closed production system” in an effort to grow numbers and preserve genetic purity. Breeding pureblood Bonsmara cattle was restricted to a select number of seedstock producers, including Smith Bonsmara. Recently, those breeding restrictions have been lifted and any cattle producer in the United States is now able to access full blood Bonsmara genetics.

Are you Ready to Add some Bonsmara to your Herd?